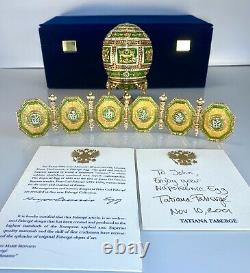 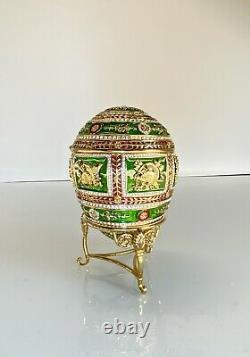 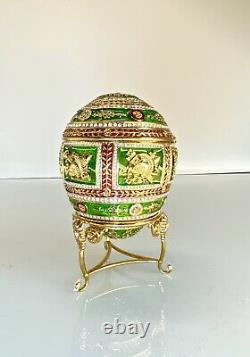 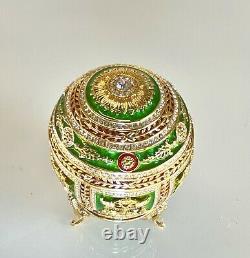 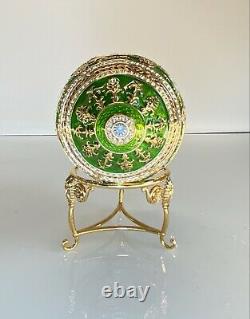 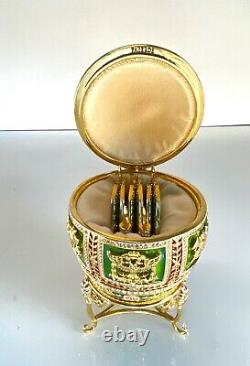 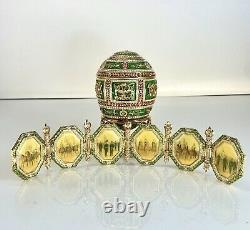 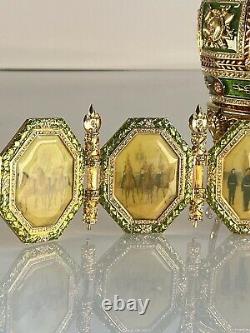 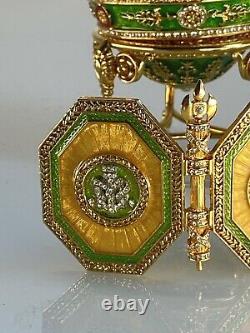 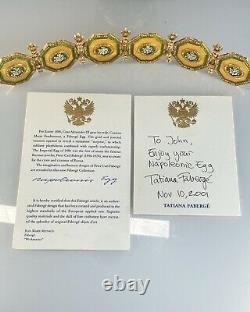 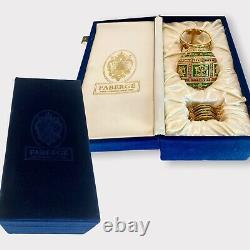 Museum Quality Reproduction of the Imperial Faberge Napoleonic Egg. From 2000 to present day a handful of companies have obtained the rights to make reproductions of various Faberge eggs and the quality varies among them. The highest quality, most desirable, and hardest to find are the first eggs produced by Tatiana Faberge twenty one years ago. This is one of those original eggs from 2001 and for those 21 years its been in the box untouched so it is in superb like new condition which makes this egg very very special.

The 24k gold plated Imperial Napoleanic egg was designed to commemorate the 100th anniversary of the Battle of Rorodino in which the Russian Armies defeated Napoleon in the War of 1812, this Egg was given by Tsar Nicholas Il to his mother, Dowager Empress Maria Fedorovna for Easter 1912. Decorated in the Empire style which was the prevalent styling through much of Napoleon's reign in France, the contrast between this egg and the Romanov Double Eagle and other Russian Military Insignia as the central motif of the Egg makes quite a statement.

The brilliance of the translucent green enamel over the wave guilloché design is in striking contrast to the blood red that is used to delineate the design segments. Every segment, including the medallions, is rimmed with Austrian crystals, 865 handset crystals in total. The effect is glittering perfection! The Egg is crowned by a sunburst of gold around a large table cut crystal which in the original Egg covers the Empress' cipher. The surprise inside is an exquisite 6 octagonal panel screen adorned with 975 hand set Austrian crystals displaying miniatures of the key officers in each of the 6 regiments for which the Empress was an honorary colonel.

The original miniatures were painted on ivory by Vasili Zuiev. The reverse side of the screen is as striking as the Egg is striking. A gold sunburst ground with an Austrian crystal cipher centered on it, edged by a narrow green enamel border which is bordered in gold. The Egg stands on a tripod base with stretcher bars take some time to post all.

Complete all original egg, surprise, and stand all in like new condition, no stones missing, no damage to the enamel, comes with paperwork and original velvet Faberge box. If you are a Faberge collector you know eggs of this quality and condition do not show up often so dont miss out! Egg: 4 3/4 Tall x 3 diameter. Stand: 2 Tall x 2.5 diameter.

The seller is "paramountcollectibles" and is located in Las Vegas, Nevada. This item can be shipped to United States, Canada.